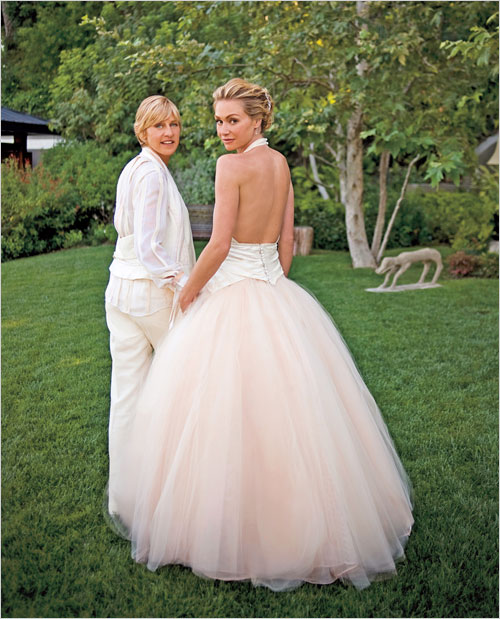 BEFORE millions of television viewers, under the dewy and beneficent gaze of Oprah Winfrey, the two of them traded moony glances. They held hands. They spoke the language of sonnets and torch songs.

“It was like an arrow was shot through my heart,” one said, describing an early meeting. “I felt weak at the knees.”

“I’m going to be with her until the day I die,” responded the other. Then their wedding video was played. It showed them in white — both of these brides.

In what may have been the most public display of gushingly romantic affection between two gay or lesbian celebrities, Ellen DeGeneres and Portia de Rossi professed their love in the secular chapel of Oprah Winfrey’s daytime talk show on Monday.

The moment came less than a week after voters in Maine, like those in 30 states before it, rejected same-sex marriage, and just a day before New York legislators would again postpone consideration of a bill to legalize such weddings, conceding inadequate support.

And it underscored what a fascinating example Ms. DeGeneres is setting, not to mention how tough it is to figure out precisely where Americans stand on an issue so fiercely contested that the Roman Catholic Archdiocese of Washington, D.C., said last week that it would scale back social service programs if the district legalized same-sex marriage.

In the handful of states where same-sex marriage is legal, legislatures and courts — not voters — have made it so. A few polls in recent months have suggested that while a majority of Americans believe that gay couples should be able to enter into unions with some of the legal protections of marriage, a minority believe that gays and lesbians should be permitted to “marry,” per se. Same-sex marriage doesn’t fit into the kind of family that many Americans believe should be idealized; it offends many others’ deeply felt religious principles.

And yet Ms. DeGeneres, who exchanged vows with Ms. de Rossi during a span last year when same-sex marriage was legal in California, seems more popular than ever — and among audiences squarely in the mainstream.

A decade ago, she had trouble getting work, a development that she and many observers chalked up to her being “the most famous lesbian in the world,” as Ms. de Rossi described her on “Oprah.”

But now she’s on the cover of the current issue of O magazine, exclusive real estate usually inhabited by Ms. Winfrey alone. She’s a pitchwoman not only for American Express but also for Cover Girl makeup, a heartland product if ever there was one.

Come January, she’ll join the other judges on “American Idol,” the highest-rated prime-time television program in America, one that Middle American moms, dads and kids watch together.

And the audience for her own daytime talk show — designed less to challenge viewers than to tickle and warm them, like a fuzzy blanket — hasn’t diminished since Ms. de Rossi began popping up frequently in Ms. DeGeneres’s remarks, according to Nielsen figures.

Several gay and lesbian leaders speculated that Ms. DeGeneres’s good fortune was a harbinger of where same-sex marriage is headed, and said it exemplified the way issues involving gays and lesbians often play out. Culture leads politics, and support for familiar, respected individuals precedes support for a larger, more abstract idea.

“The story of Ellen is, in a way, a sort of metaphor for the story of the movement,” said Toni Broaddus, the executive director of the Equality Federation, an alliance of state-based gay-rights groups.

Then again, Ms. DeGeneres isn’t exactly the lesbian next door. She lives in that exotic galaxy called Hollywood, whose brightest stars are seldom asked to conform to the same rules as others. That’s the fun and wonder of them: the way they color so vividly outside the lines.

What’s more, she’s a comedian, cushioning much of what she does and says in the social Bubble Wrap of laughter.

“She’s dancing in her sneakers and making everybody else get up and dance, too,” observed Rachel Maddow, the openly lesbian host of an evening political talk show, on MSNBC. “She’s unthreatening by the nature of her comedic gift.”

Perhaps by dint of her gender, too. The lengthening list of prominent “out” lesbians on the small screen — Ms. DeGeneres, Ms. Maddow, Suze Orman, Jane Velez-Mitchell, Wanda Sykes — isn’t quite mirrored by a comparable list of openly gay men.

Ms. Maddow and others said that may be because some of the most damaging, off-putting parts of the persistent stereotype for gay men — that they’re promiscuous, even predatory — don’t extend to gay women, who are generally seen in less sexual terms.

They look at gay men and that’s all they see, Mr. Savage said, adding: “They look at Ellen and they don’t know what she does with Portia.”

Ms. Maddow said that it may also make a difference that Ms. DeGeneres never winked and crowed about going on hot dates but instead rhapsodized about being in love and tying the knot.

Perhaps everything is a matter of delivery, context and timing. When Ms. DeGeneres came out as a lesbian in 1997, and her well-established, prime-time situation-comedy alter ego came out with her, there was a bluntness to the revelation (“Yep, I’m Gay” were the words with her picture on the cover of Time) and her sexual orientation took center stage. She was gay first, funny second.

Now she’s funny first, and as apt to refer to animal welfare or her vegan diet as to having a wife. Ms. de Rossi has appeared only once on Ms. DeGeneres’s talk show, where references to gay political issues have been fleeting, with some exceptions. Ms. DeGeneres did grill John McCain about same-sex marriage, and she jokingly asked Laura Bush and her daughter Jenna Bush Hager if she could use the Bush ranch in Texas, as Ms. Hager had, for her own wedding.

More recently she has been saying and sharing more, including the “Oprah” wedding video, on which she and Ms. de Rossi feed each other bites of cake. They look like countless other newlyweds. Then again, not.

Alan Davidson is the founder of ThroughYourBody.com and the author Body Brilliance: Mastering Your Five Vital Intelligences, the #1 bestselling Health & Welness book and winner of two National Book-of-the-Year awards.

Alan is also the author of the Free report “Body Breakthroughs for Life Breakthroughs: How to Peak Your Physical, Emotional, Mental, Moral, and Spiritual IQs for a Sensational Life” available at www.throughyourbody.com

This site uses Akismet to reduce spam. Learn how your comment data is processed.